Introduce yourself. What is your name and where are you from?
My name is Will McComb and I am a third-year graduate student in the ceramics area. I’m from Lexington, KY.

What attracted you to the University of Mississippi Department of Art & Art History?
I got to know Matt [Long] when he was a visiting artist at the art center where I was a resident and it made me interested in the program. So, I applied and that was that really.

What made you pick the area of concertation you’re currently studying?
Originally, I had no interest in being an art major and was going to major in philosophy in undergrad. Then I took a ceramics class on a whim because I had an elective I needed. I think this happens to a lot of people who touch clay for the first time, “Oh this is it!” I think it’s because of the immediacy of the material. As soon as you touch the clay it responds and there is something really empowering and powerful about that. The longer I worked with it the more interested I got in my ability to construct and build things and then eventually to make pottery. Things that had some kind of use to other people. It became really addictive. I also love the technical side of it. Getting to solve all these engineering problems and chemistry problems is really exciting for me. 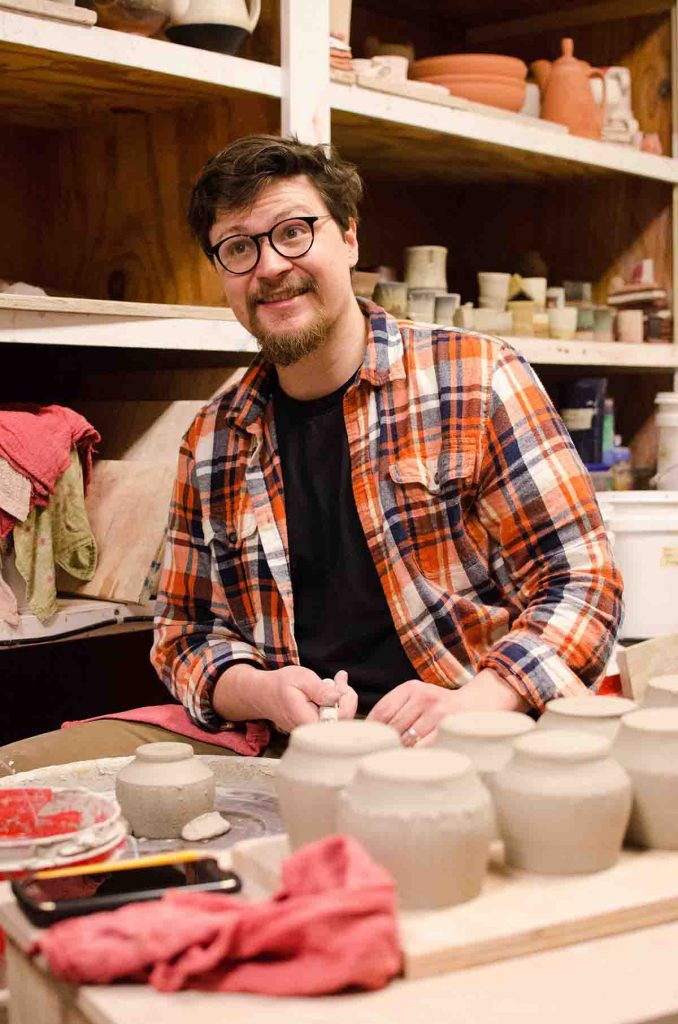 Could you talk about your process in creating a piece?
Most of my work is made on the potter’s wheel. Wet clay just turned into some kind of shape.  Then there are subtle alterations that happen on the wheel. I’m using a relatively coarse clay body so that any marks that I make in the clay, even during the initial wheel-throwing process, are recorded and the coarseness of the material is pulled through those marks. Then after all the pieces are made and they’ve gone through the initial firing process, they are finished in an atmospheric kiln called a soda kiln. They’ll develop a lot of inherent variations on the surface and a really distinctive color palette that is based on that kind of firing. I’m really interested in having the material show through to the final product.

What type of artist do you consider yourself?
I’m a functional potter. That is kind of the category I fall into I guess. I’m interested in making things for people to use. Not just on the level of making a tool for them, but also because I like the idea of engaging with art in that space. If you have to drink coffee or tea in the morning, you have to drink it out of something right? So, I love the idea that instead of drinking out of a mass-produced object from the store, instead, you are drinking out of something that is incorporating all the aesthetics of painting or sculpture. I love that you can engage with art in that real intimate and mundane space. I was originally interested in sculpture in ceramics and eventually figured out I was way more interested in somebody being able to pick up and use my objects as opposed to having them sit at a distance.

So, what is your take on people not using cups but admiring them instead?
I mean, I’m also okay with that because the reality is that as an artist of any kind, ultimately the goal is to have people enjoy the things that you make. If they like them on any level, I’m happy. In terms of the question of intent, while I’m making, I always have in mind this notion that someone is going to end up using it. In reality if they don’t use it and appreciate it as a beautiful object, I still think I’m halfway there. But ultimately I want it to be both beautiful and usable.

Every piece of ceramics I’ve purchased from Mud Daubers, I don’t use it because I admire it so much. I’m just afraid to use them, haha!
I think that’s awesome although I would also encourage you to use them – don’t be afraid of them. Hopefully, they are made well enough that you are not going to break them.

Could you talk about your thesis?
For the most part, my thesis is going to focus on sets, table settings, things like that. I’m sure I’ll have individual pieces as well to fill up space. I’m really interested in the suggestion of ritual. Not necessarily quite on the religious ritual but more like the casual ritual, we all develop in daily life. I also like the idea of introducing an artistic element to these utilitarian objects, creating a specialness around those rituals. I’m trying to organize my pieces in settings that imply certain types of use but also have a sculpture element to them. There is a specialness lent to it. It’s not just a cup sitting there that you might take home and use. It’s something that you are forced to stop and reconsider a little bit.

Which professors mentored/inspired you the most?
It’s undeniable that the biggest impact is from my area head, Matt Long. I’ve worked pretty closely with Dr. Kris Belden-Adams. I’ve taken a lot of my art history classes with her and we did an independent study together so she’s had a big influence. I’ve got a series of critiques from Jackson that have all been really impactful. I think I’ve taken little things from all the professors but those three probably pushed me the most.

What was your favorite class during your years here?
So outside of ceramics, I’m definitely a huge art history and theory nerd. I really enjoyed Theory and Criticism with Dr. Kris. Any of the art history courses were probably the standouts other than ceramics. And then of course in ceramics we also have the additional course Glaze Calculation. Its where we get to dive into the chemistry side of clay and glaze formulation. Which I’m already into anyways, I love that class.

How has the Department of Art & Art History fostered your growth as an artist?
Just providing the time, opportunity, space, and facilities. If nothing else, those things are amazing. When else in life do you get to take three years to make art, you don’t really. While our course load is demanding, it has a lot of more free space in it compared to an undergraduate degree does. You’re really committed to creating work for that entire time. In addition to that of course is that you’re getting constant feedback from professionals in the field, from your peers. I found my work was able to develop at a speed that it probably wouldn’t have outside of here and what I’ve most definitely been able to do in this very protected environment is to try weird things that I’ll probably never do again! But I got to indulge my creative impulse. Outside of here, If I was having to worry about financial burdens or something like that, you simply couldn’t do it. My first year here I took a whole semester making weird sculptures that I’ve never made again. I couldn’t take four months and just stop doing everything else and make weird sculptures if I wasn’t here. It wouldn’t be possible or a good idea. But here, you can do it and you are able to learn things about yourself and your work.

What are your plans after graduation?
My wife has a job here on campus so we’re going to hang out for a year because she wants to accumulate a little more experience. At that time, I’m going to apply for jobs and may enroll part-time and be around the studio. After that, we are going to go wherever I can find a job. I’ll also apply for residences.

Is there any advice you would like to give to incoming art students?
One of my biggest pieces of advice to all new grad students is, get lots of sleep. You can’t always get lots of sleep. What happens to people, they get so obsessed trying to get all their work done, that they don’t prioritize taking care of themselves and then they burn out. This is a really intense program. Figure out how to take care of your time. If you do that, this will be a really enjoyable experience.

Can we find you/your work on social media?
Yeah for sure. It’s @mccombwill on Instagram.

What are you listening to right now?
I’ve been listening to this really campy record by a band called Type O Negative. I saw a review for it online. They are like a goth, metal band and it’s something I never wanted to listen to but it’s pretty good! But mostly it’s hysterical because the lead singer looks like Dracula. I’m also a really big fan of Phoebe Bridgers. She just released a new song and I’ve been going back and listening to all her old work. She’s really amazing.

Are you binge-watching anything at the moment?
I really don’t have time to binge-watch anything but my wife and I have been re-watching the Office.

What is your favorite Oxford spot to hang out?
We hang out almost exclusively at the Blind Pig. It’s kind of a dive bar but better. They have pretty solid food.

What’s your go-to restaurant in Oxford?
Our recent favorite has been Oxford Canteen. It’s not fancy good by any means but the quality is really high.

What is your favorite time of year in Oxford?
Probably the spring. It gets really hot in the summer, haha!