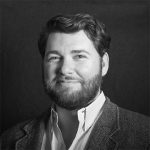 Tyler Barnes, a second-generation artist, originally from Alexandria, Louisiana, received his BFA in Graphic Communications from Northwestern State University, Natchitoches, Louisiana in 2008. Upon receiving his BFA, Tyler worked in Austin, Texas as a Design Associate at Marc English Design and has maintained his own freelance design studio since 2009.

In 2016, he received an MFA degree in Graphic Design from Texas A&M University-Corpus Christi where he broadened his personal process as an interpreter of culture and procured new insight into design theory and pedagogy. As a graduate assistant at TAMUCC, Tyler taught a wide range of graphic design curriculum from foundation courses to corporate identity. During his time in Corpus Christi, Tyler also worked as a graphic designer for The Collective, a Corpus Christi design cooperative made up of local firms Artfly Design + Snyder and Associates.

A graphic designer and educator, Tyler draws his inspiration from the investigation and critique of the surrounding visual landscape. His work aims to not only solve a design problem, but strives to elevate the experience of all communication art—so that the visuals and objects we encounter in our daily lives are more artfully presented and thoughtfully conveyed.

His work has earned ten American Advertising Federation Awards from 2014-2015, including two district ADDY’s. His work has been featured in several publications including the For Print Only Awards 2012 Annual, which is a juried competition organized by UnderConsideration, celebrating the best print work from around the world. He has also been featured in several exhibitions including The OSO BAY Biennial juried by James Victore.

Joining the art faculty in 2016, Tyler is currently a Graphic Design Instructor for the Department of Art at The University of Mississippi, where he hopes to instill the value of visual communication for the empowerment of design’s future.