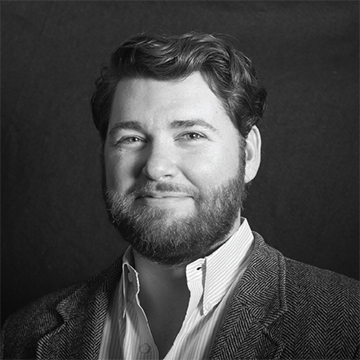 Tyler Barnes, a second-generation artist, originally from Alexandria, Louisiana, received his BFA in Graphic Communications from Northwestern State University, Natchitoches, Louisiana in 2008 and his MFA in Graphic Design from Texas A&M University-Corpus Christi in 2016.

Throughout his career, he has worked in a number of professional design studios, including Marc English Design in Austin, TX, Snyder + Associates in Corpus Christi, TX, and Artfly Design in New Orleans, LA. He continues a working relationship with Artfly as a brand specialist for their New Orleans office. He has also maintained his own freelance design studio since 2009.

Tyler Barnes’ professional work has been recognized regionally, nationally, and internationally in a multitude of competitive venues. His work has earned ten American Advertising Federation Awards, including two district ADDY’s, has been featured in several publications including UnderConsideration: For Print Only, Creative Quarterly, Graphic Design USA, and the Logo Lounge Book Series. He has also been featured in several exhibitions including The OSO BAY Biennial, TAMUCC, Corpus Christi, TX, juried by James Victore and The Art of the Poster, National Juried Exhibition, Louisiana Tech, Ruston, LA, juried by Celene Aubry, Associate Director of Hatch Show Print, Nashville, TN.

He is currently an Assistant Professor of Art | Graphic Design at the University of Mississippi and has been teaching since 2016.