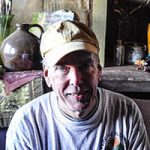 Richard Kelso was born and grew up in Cleveland Mississippi. After graduating Cleveland High School, he attended Delta State University, studying under Sammy Britt, and earning a degree in Art in 1970. During this time he also studied painting under Henry Hensche at the Cape School of Art in Provincetown Massachusetts. After serving in the military, he attended the University of Mississippi, earning his MFA in painting in 1980. He taught at Millsaps College and Meridian Community College and then moved to Jackson in 1987 where he currently resides, and became a full time painter. He is represented in collections throughout the country.