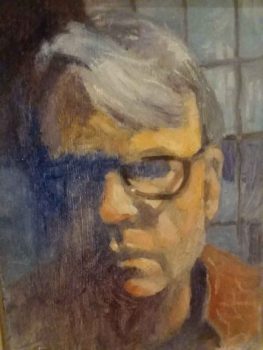 After teaching 3-painting classes while Philip Jackson was out on sabbatical in the Fall of 2014, I taught a semester at Memphis College of Art (Spring 2015). The following summer I got a job teaching high school art in my hometown of Yazoo City.

My wife Jennifer and I moved to Yazoo City from Oxford. I taught there for a year and in 2016 I found a job as Training Coordinator at a Manufacturing Company in Yazoo City. My role focuses on Chemical Operator training and I am an administrator for a Learning Management System. I had previously worked in that business for about 30-years before returning to college in 2011.

Jennifer was diagnosed with breast cancer at about a year after we moved back to Yazoo. We caught it early and she managed to beat it with surgery. She is now 2-years cancer free and has an amazing job as a Speech Language Pathologist.

Three and a half years later and we are still in Yazoo City. I am painting about 50-plus pieces per year and framing my own work. Oxford Treehouse Gallery (Vivian and Walter Neill) is my main rep and have had shows there and in several other venues around Oxford. We love going to Oxford every chance we get.
My main job allows me to travel to the midwest a couple of times a year. I was in Chicago in November of 2019 and recently in Sioux City, Iowa working while the Iowa Caucus was underway. We also visit Jennifer’s family in Iowa over the holidays each year, so, I spend a good bit of time travel between two of my favorite places on earth.

My art was featured in Delta Magazine July/August 2019 edition, I’m on the Yazoo Art Council Board Member, and I’m also serve as a Yazoo County Convention and Visitors Bureau Board Member.