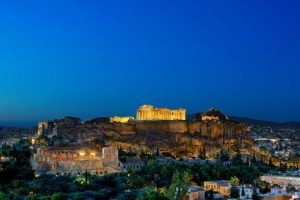 Greek Architecture is taught by Dr. Aileen Ajootian, Professor of Classics and Art, who earned her PhD at Bryn Mawr. Her areas of specialization include Greek and Roman sculpture, mythical iconography, and Mediterranean archaeology.

This course covers the basics of ancient Mediterranean chronology, geography, culture and technology while studying Greek architectural forms, their meaning, and their function in specific sites. Students also take a walk of the University of Mississippi campus to view the various elements of Greek architecture. Topics include: Minoan Crete, Mycenae and Mycenaean sites; Greek Archaic, Classical, and Hellenistic archaeology, with special attention to the Athenian Acropolis, the Sanctuary of Poseidon at Sounion, and the Sanctuary of Artemis at Brauron.

The students take advantage of the UM Museum while learning about the culture of the ancient Mediterranean world. The David M. Robinson Collection of Greek and Roman Antiquities, one of the finest collections in the United States. Covering the 1000-year period from 800 B.C. to around A.D. 300, the collection contains Greek and Roman sculpture, Greek decorated pottery, inscriptions, architectural fragments, inscribed Sumerian clay tablets, small artifacts in terracotta and bronze, Roman copies of Greek art works, ancient surgical instruments, and Greek and Roman coins.

“Dr. Ajootian is very intelligent and knows every aspect of the course material. She had a lot of first hand experience with the monuments. It was an incredibly interesting course and she strongly encouraged one on one meetings and out of class research.”