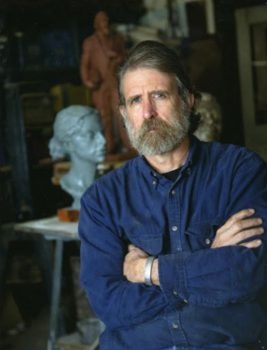 William Beckwith has produced public and private bronzes for over 30 years. His work is mainly figurative. He is widely known for his portrait busts, many of which are modeled from photographs of deceased subjects. Originally from Greenville, MS he now lives & works out of Taylor, MS, winner of the “Governor’s Award of Excellence in the Arts” for 2001. His work has been exhibited in Splashlight Studios and Frank Marino Gallery, New York, NY, Mississippi Museum of Art, Jackson, MS, Louisiana Word’s Fair, New Orleans, LA, and the National Museum of American Art, Smithsonian Museum, Washington, DC. He has won numerous awards & honors and is represented in public & private collections nation-wide. He taught sculpture part-time at the University of Mississippi Department of Art & Art History.